“So they’ve got us surrounded, good. That simplifies the problem! Now we can fire in any direction, those bastards won’t get away this time!”

In 31 July 2004 the newly completed State of Idaho Veterans Cemetery was dedicated and opened for use. These are images of the events and attendees.
Slideshow
View 18 photos 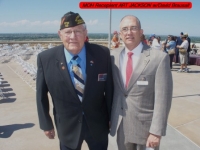 “The galleries are full of critics. They play no ball. They fight no fights. They make no mistakes because they attempt nothing. Down in the arena are the doers. They make mistakes because they try many things.
The man who makes no mistakes lacks boldness and the spirit of adventure. He is the one who never tries anything. He is the break in the wheel of progress. And yet it cannot be truly said he makes no mistakes, because his biggest mistake is the very fact that he tries nothing, does nothing, except criticize those who do things.”