These Photos were taken in August 2013 by Retired Marine Combat Photographer Walt Modler on a first trip to the Museum of the Marine Corps. They are included as reference if you are planning a trip to Quantico and or Washington D.C.

Located just before the parking lot of the Museum. This is also an entrance to the Semper Fidelis Memorial Park behind the chapel. A winding (wheel chair accessible) pathway passing the “Human Cremains Memorial Site”. the pathway lined by dedication bricks and passing many monuments donated by Marines and friends of Marines dedicated to centuries of service to man and country.
Slideshow
View 27 photos 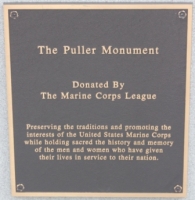 These two statues are located in Quantico. One is at the Museum a new donation the other is located on Quantico Marine Base and is the orginal made in France in 1918.
Slideshow
View 11 photos

National Museum of the Marine Corps

The National Museum of the Marine Corps is designed to be the centerpiece of a complex of facilities called the Marine Corps Heritage Center. This multi-use, 135-acre (0.55 km2) campus includes the Semper Fidelis Memorial Park and Semper Fidelis Chapel; a demonstration area with parade grounds; hiking trails and other outdoor recreational offerings; a conference center and hotel; and an archive facility to restore and preserve Marine artifacts.
Slideshow
View 11 photos

The floor of the rotunda displays the map of the pacific theatre of War.
Slideshow
View 54 photos

A look inside the history of the Marine Corps of a incomplete telling. The museum opened on November 10, 2006 and features the following permanent exhibits: Leatherneck Gallery, Legacy Walk, Making Marines, World War II, Korean War, Vietnam War, On June 5, 2010 the following three exhibits were opened: Defending a New Nation (1775-1865), Age of Expansion (1866-1916) and World War I (1917-1918).

Semper Fidelis Memorial Park overlooks the National Museum of the Marine Corps. It is a place of remembrance and reflection, dedicated to the service of all Marines and those who have supported the Marine Corps.
Slideshow
View 83 photos

One of three scaled-down replicas reside at three Marine bases: just outside the front gate of Marine Corps Base Quantico in Virginia, adjacent to the parade deck at Marine Corps Recruit Depot Parris Island and the main gate at Marine Corps Base Hawaii in Kāne'ohe Bay, Hawaii. In honor and memory of the men of the United States Marine Corps who have given their lives to their country since November 10 1775. "Uncommon Valor was a Common Virtue"
Slideshow
View 17 photos

“By the time the Marines are through with them, the Japanese language will be spoken only in Hell!”