“No war is over until the enemy says it’s over. We may think it over, we may declare it over, but in fact, the enemy gets a vote.” 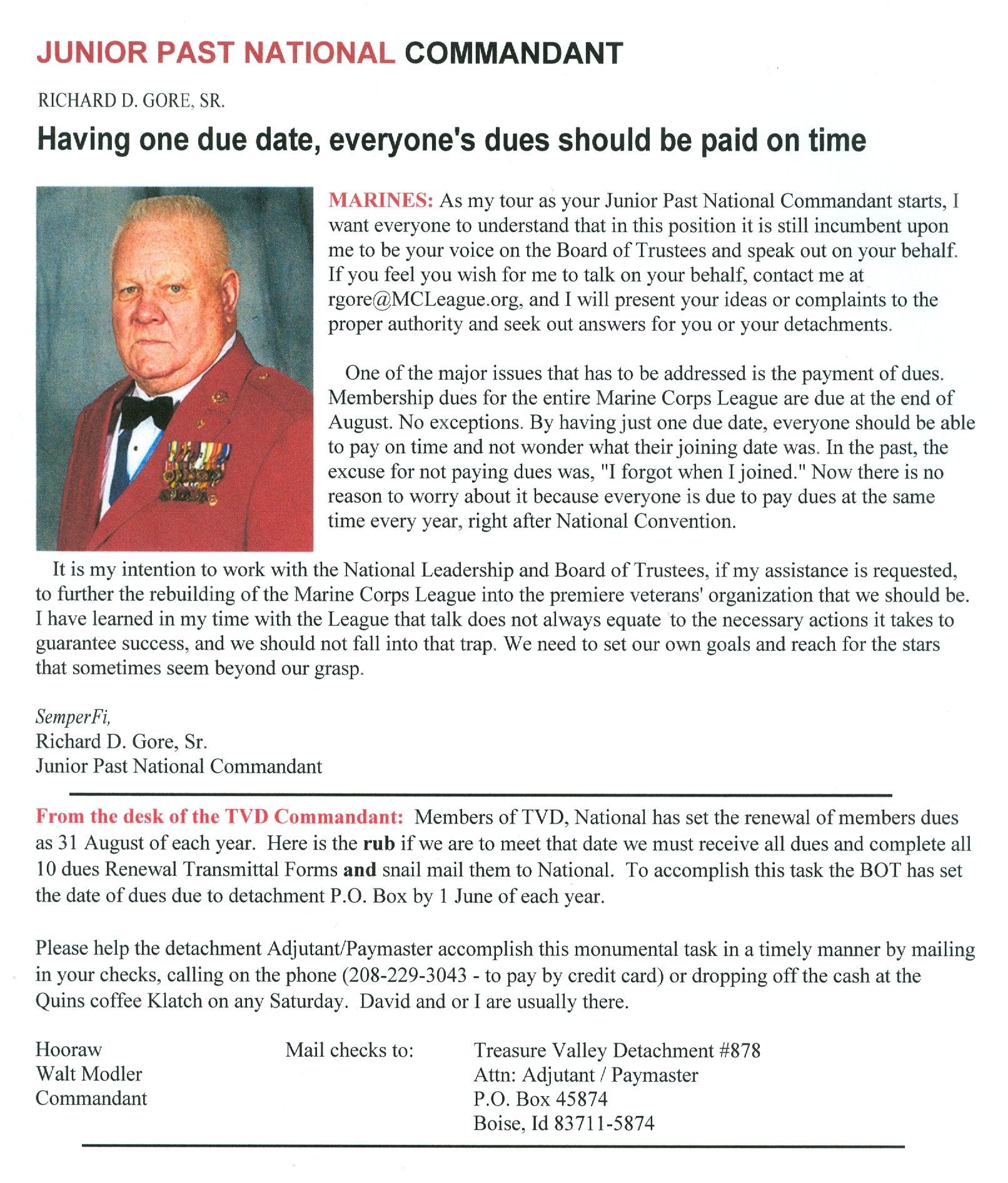 Also to provide for viewing by the Detachment Adjutant or Commandant a certified true copy of the applicants most current DD214.

SECTION 610 – MEMBERSHIP DUES AND FEES – The payment of annual National membership dues entitles all members in good standing an automatic subscription to the Marine Corps League publication, and enrollment privileges in any National Group Insurance Programs that may be in effect.

SECTION 615 – GOOD STANDING – All members shall be considered in good standing in the Marine Corps League,

SECTI0N 620 – DELINQUENT MEMBER – A member shall be identified as delinquent whenever the member’s dues are not paid and transmitted on or before membership expiration date; as shown on member’s card.

SECTION 645 – LIFE MEMBERS – Regular or Associate Members of the Marine Corps League who are in good standing (as defined in Section 615 – GOOD STANDING- All members shall be considered in good standing in the Marine Corps League, (a) Except when: (1) Required dues are not paid, and transmitted, on or before expiration date as is shown on the member’s card.) may become a LIFE MEMBER, upon proper payment of the fee, as is required herein. A LIFE MEMBER shall be subject to the payment of NO further dues to a Detachment, Department, or National. Such member shall have all the privileges, rights, and benefits enjoyed as a member so long as that LIFE MEMBER shall live. Should a Marine Corps League member choose to become a member in multiple Detachments, they must become a member in good standing by paying Annual or Life, Membership dues in each additional Detachment. The Life Membership fee shall be as established by the National Convention.

[a] The full Life Membership fee shall be paid to National Headquarters with no discounts, no rebates, and no installment plan, whether
such fee is paid by the individual or awarded by a Department or Detachment.

“We have two companies of Marines running rampant all over the northern half of this island, and three Army regiments pinned down in the southwestern corner, doing nothing. What the hell is going on?”

General. John W. Vessey Jr., USA, Chairman of the the Joint Chiefs of Staff during the assault on Grenada, 1983